In addition to keeping carbs low, there are some specific foods that may help boost fat loss and/or help reduce menopausal symptoms.

Flaxseed may help relieve certain menopausal symptoms, especially hot flashes. However, the effects seem to vary from woman to woman, based on anecdotal reports and high-quality studies

To learn more about flax’s health benefits, safety profile, and ways to include it in your diet

Green tea is rich in catechins, which are potent antioxidants. It’s also the best source of a specific catechin known as epigallocatechin gallate (EGCG), which has been credited with beneficial health effects on cardiovascular and metabolic health. 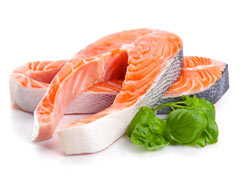 Fatty fish has been shown to reduce inflammation, lower triglycerides, improve artery function, and protect brain health. These effects are largely due to its high content of EPA and DHA, the long-chain omega-3 fatty acids found in salmon, sardines, mackerel and herring.

In an RCT of 87 postmenopausal women with metabolic syndrome, the women whose diets were supplemented with omega-3 fats had significant reductions in insulin resistance, blood pressure and inflammatory markers compared to those who followed the same diet without omega-3 supplementation ().

To get the benefits of these omega-3 fatty acids, aim for a minimum of two 100-gram (3.5-ounce) servings of fatty fish per week.