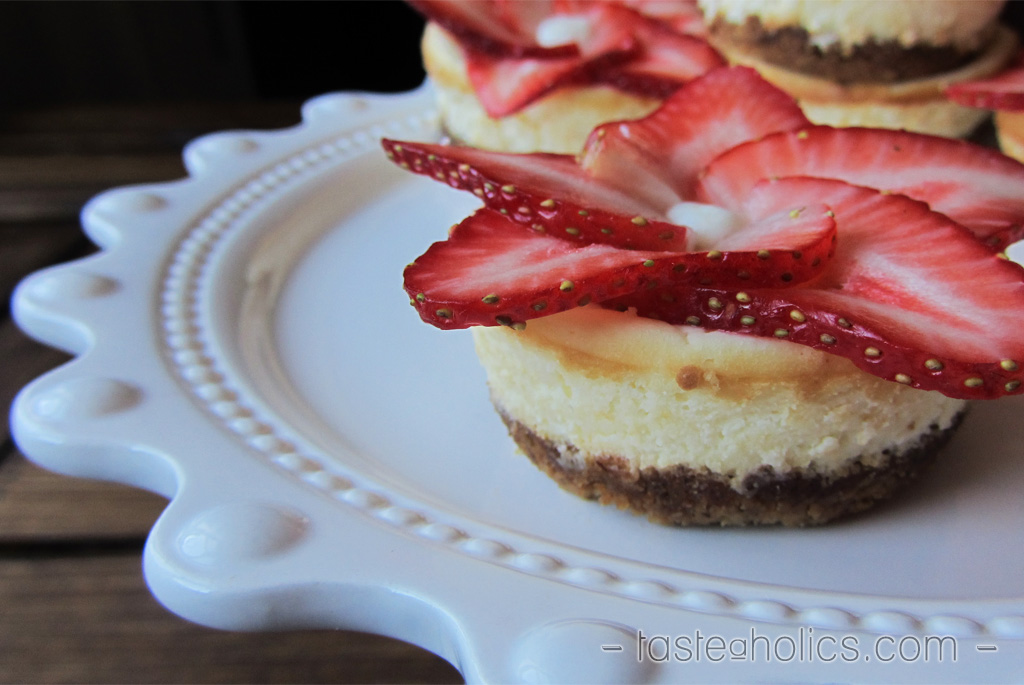 Preheat the oven to 350°F. To make the crust, melt some butter until liquid and mix in your almond meal until you have some that feels like crumbly play dough.

Take about a teaspoon at a time and press the dough into the bottom of a muffin tin. Tip: line your pan with cupcake liners for easy removal! Cheesecake is very soft and if hard to scoop out without causing damage! Bake these crusts for about 5 minutes. They’ll come out slightly brown and crispy.

Then take your room temperature cream cheese and beat it with an electric hand mixer or standing mixer until creamy. Then add vanilla extract, lemon, an egg and your sugar substitute, erythritol in our case. Beat until all combined.

Use an ice cream scooper to fill all the crust-bottomed muffin tin cups evenly almost to the top (the mini cheesecakes will rise while in the oven but will flatten while refrigerating). You can also line each cup with a cupcake liner to make removing the mini cheesecakes easier.

Bake at 350°F for about 15 minutes. The mini cheesecakes should be slightly jiggly. Let them cool in the refrigerator for ideally 24 hours. But if you’re strapped for time, try putting them in the freezer for as long as you can.

Once the mini cheesecakes are done cooling, slide a knife around the edges of each muffin cup to loosen them up. Then use a fork and your hands to help them out cleanly. As a delicious bonus, slice up some strawberries and arrange them however you like on top of the mini cheesecakes.

I never really bake, especially desserts, but these are so delicious and really easy to make! I used a tub of whipped cream cheese (I was trying to use it up) and some ricotta and they came out great. I also didn’t have almond meal so I used almond flour instead; the crust wasn’t super crispy but still good. Also, I didn’t have lemon extract but I love lemon so I squeezed the juice of about half a lemon into the cheesecake batter. I made a lot of substitutions but these are really good!