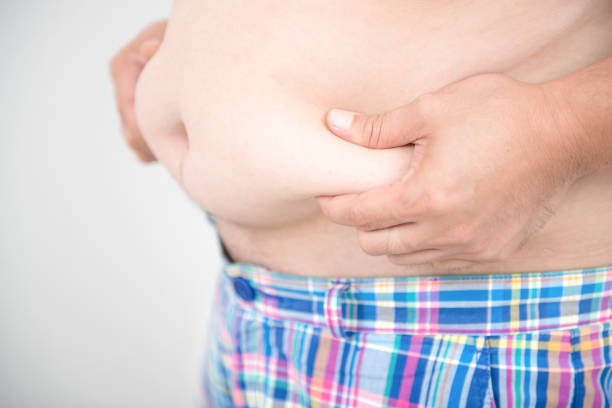 Fundamentally speaking, burning fat is all about creating a caloric deficit. (You eat less food than your body requires, thus forcing your body to make up the difference by getting energy from fat reserves).  This isn’t a theory. It’s the first law of thermodynamics. It’s literally one of the laws of physics.

However, as many diligent dieters have personally learned, the amount of weight that you lose each day, or each week, is rarely consistent.

Some weeks, you’ll find that you don’t lose any weight at all — even when you’ve had a perfect workout schedule, and eaten at a perfect caloric deficit. Other weeks you’ll discover that you lost way more weight than the numbers say you should have lost.

If the laws of calorie-in / calorie-out are real, why would a person lose such dramatically different amounts of weight from week to week, despite following an identical routine?

As you burn fat, you’ll sometimes notice that the area where the fat used to be tends to take on a sort of “squishy” consistency. “Squishy” fat forms because, as fat cells are extracted and mobilized, the space where they once existed gets filled with water, making the area feel “softer” than normal.  Sometimes “squishy fat” forms in places we can see it, and sometimes it forms more internally where we can’t. Sometimes it’s in huge pockets, and sometimes it forms at a microscopic level where you can’t see it or feel it. But the areas that were once filled with fat sit there, filled with water!

The squishy-fat areas can last for a few days to as much as a few weeks.  Then, one day, inexplicably and out of nowhere, all that squishy fat suddenly tightens up! In some cases, you’ll even (suddenly) look leaner!  And at the same time, the scale suddenly drops — and you cheer because you feel like whatever you did the day before caused you to lose a ton of weight!

It will probably surprise you to learn that almost ALL scale movements are the result of fat burn that happened days, or even weeks ago!  (Sudden scale movement at the very beginning of a diet is usually the result of water-weight being dropped due to a decrease in carb intake, however).

Did you catch that?  When the scale goes down while dieting, it’s usually because of fat that you lost several days (or even weeks) ago, and your body is finally expelling the water that took its place.

Put another way, even though you may be in a state where you are constantly burning fat, the results of that effort may not show up on the scale immediately.  And more likely, they’ll show all at once, one day, where you’ll have a sudden “whoosh” of weight-loss!

During World War II, a scientific study was performed wherein 36 men volunteered for a semi-starvation diet of 1,500 calories a day for 6 months, combined with several hours of hard labor every day. This became known as the “Minnesota Starvation Experiment”. (The purpose was to learn about the physiology and psychology of starvation, and use the data to help returning POW’s).

One of the many interesting findings that came from this study was that weight loss progressed in a nice, linear fashion in the beginning. Men lost about 2 pounds per week, every week. After some time, though, it became erratic and unpredictable.

Body weight would remain stagnant for several weeks followed by overnight “bursts” of large amounts of weight loss (3+ pounds).  It’s physically impossible to burn several pounds of fat overnight, so how is that possible?

Well, the scientists looked into the phenomenon further and found the answer: water retention.

The men were steadily losing fat even when their weight wasn’t changing because as they lost more fat, they held more water.  This only became obvious once the excess water was expelled, which gave the appearance of very rapid weight loss.

So let’s be very clear on what was happening:

The calorie deficit did its job by systematically reducing body fat, but the reductions in total body weight were often counter-balanced by increases in water retention.

HOW CAN YOU AVOID THE “WHOOSH EFFECT”?

Short answer: You can’t… Or more accurately put, you don’t really need to. It’s your body’s natural method of coping with fat-loss. Just let it do its thing.

Long answer: Scientists in the study referenced above actually found a trigger to cause the whoosh effect.  You ready?   It was a single meal that included a dramatic increase in caloric intake. For instance, a 2,300-calorie meal was served to celebrate the half-way mark of the experiment, and researchers noted that many of the men woke up several times to pee that night and, in the morning, were several pounds lighter than the day before.

Yeah, you read that right, a small cheat-meal triggered the drop in water-weight… And it’s one of the key reasons I recommend incorporating a REASONABLE cheat-meal once a week into your long-term weight loss plan.

Once again, it’s important to reiterate that you don’t NEED to do anything to trigger the whoosh effect. It’ll happen when it happens. But sometimes, if you’ve been dieting for a long time (6+ weeks) and haven’t lost anything on the scale for 1-2 weeks, a small cheat meal can help you feel like things are “back on track”.

Second, and probably more importantly, don’t expect results every single morning when you weigh-in. While it CAN work this way (and often does early on), it’s not typical.  You might find that weighing-in once a week is a better strategy if you find yourself dealing with this problem more than you like.